Technically we are not an animal-free homestead, we have always had some pets. It started with our daughter wanting a bunny. Over the years we have had several bunnies, a guinea pig, a hamster, and several cats. But we did not butcher or eat them. The real homesteading animals that we have raised were chickens before we gave up on backyard chickens and became a farm animal-free homestead. Now we are down to just having a cute cat. By the way, the cat in the picture is intentional, to show that we can have animals, without eating them.

I was listening to the book Farm City, and really enjoying it for the writing style and the simple story. I also loved the fact that Novella Carpenter, the author, was growing her own food right in the city. The book also includes a lot of animal husbandry and yes, even butchering details. Since I grew up on something like her city farm, just much more urban and homy, I could relate to some of it. Most of all I rejoiced in the fact that I myself do not have to go through so much trouble to get food on my table. More about it later.

The history of homesteaders food choices

The Homestead Act (1862) that set in motion a program of public land grants to small farmers was not the start of people growing and raising their own food. All over the world, people grew and raised different foods for many generations. In fact, before there was communal or commercial food, everyone was in some way a homesteader who made sure to get food on the table by making it.

HOMESTEADING IS NOT DEFINED BY WHERE SOMEONE LIVES, SUCH AS THE CITY OR THE COUNTRY, BUT BY THE LIFESTYLE CHOICES THEY MAKE.
From Homegrown and Handmade

Wherever meat played a big rule in people’s diet, animals were hunted or raised. In places where meat played a very insignificant rule, vegetables and legumes were grown.

The old traditions of the eastern world were vegetarians. We associate health and longevity with them.

The majority of the western world was heavy on meat, so homesteaders raised animals for food. Most of our ancestors did. I grew up on a homestead where farm animals played a big part. I share more about it in my post: How people lived simple yesterday.

Our ancestors raised animals for food because they wanted to. And they often wanted, because it was socially the thing to do. The traditional food that is socially accepted played and still does play a big role.

Our parents and grandparents who lived through the world wars knew how to survive without meat. Even now we, as vegans, are often told that we eat like in the lean years, and they admit that they were very healthy during those days. Of course, we as the generation after the war have no relation to it.

The same is true for whole-grain products. Whole grain bread was everyday bread, white bread was desired and not so often available.

It is not true that all homesteaders back in the days raised animals for meat and ate whole-grain bread. Often the poorer ate beans and whole grains and were strong and healthy. The better off had meat and white bread and servants to do the work for them.

The young generation of homesteaders in the modern back to the land movement often has no relations to these old historical patterns. In fact, most of us grew up eating meat and not even thinking about it. Many, like me, grew up raising animals on the homestead or farm.

There was never a point in my life where I decided to be an omnivore. I was it before I could even speak. Most likely it is the same for you.

I even remember hiding in a closet while our family’s pig was being slaughtered, so I would not hear the heartbreaking sound of that dying animal. But I do not remember making any negative connections between that suffering animal and the food at the pig slaughtering feast later that night. The constant slaughtering on our homestead had deadened my feelings.

Homesteaders who have not grown up so close to raising animals for food have an even more distant connection to it.

Many nowadays homesteaders and farmers face the death of an animal for the first time while butchering their own. The book Farm City, that I just finished listening to, explains it in most colorful words. Like Novella Carpenter many homesteaders and farmers who want to connect to their food, start with little to no knowledge of what it actually takes.

If a homesteader decides to raise animals because he or she eats meat, that in itself is a noble task. After all, that’s what homesteading is about, to care for own needs and in this case food.

Homesteaders in the past often made their food choices relating to social norms. Homesteaders of today are often misled to believe that butchering animals is just a must-do part of homesteading.

There must be a better reason for raising or not raising animals for food.

Today our food choice does not have to be according to the social norm of being poor or rich, “in” or “out”. In a day and age where food is easily accessible to most of us, we can choose what actually nourishes our bodies.

My mother-in-law who grew up on beans and whole-grain, remembers that they were healthy back then. They had healthy teeth and felt good overall. Why did they not stick to that diet? Simply because it was the poor man’s diet during the lean years. Now they can afford better. They also can afford all the high blood pressure and other illnesses and medications that go with the “better” diet.

There was never a time on our planet earth where information to make smart decisions was so easily available. We also are free to make choices without being excommunicated from the society we live in except of course if we are part of some radical group.

For us personally being a farm animal-free homestead feels freeing and empowering. After we informed our self on what is best for us, we had the freedom to decide. We eat vegan by choice not by following any radical movement (we are not vegans, we eat plant-based food).

Nutritional Facts is a good place to find the latest updates on what science is saying about our favorite foods in order to help us make the healthiest choices for us and our family.

Being an animal-free homestead

Growing up on my parents’ homestead, we would bring in loads and loads of food for the animals. We don’t need nearly as much food as a pig does in its short lifespan. Nor do we need as much grain as chickens do for the eggs they lay. And don’t get me started on the food for a cow. Just storage for all the hay took up a space bigger than our greenhouse today. My mom often complained that animal food would consume all our money.

The nuts, seeds, and legumes, that replace the animal products in our diet, are widely available and don’t need any extra storage space. They also not overpriced either. Read more on what we eat and store in our plant-based pantry.

The best part is, that we can store our nuts, seeds, and legumes in our pantry and not in the stable, and we don’t have to go check on them twice a day in any weather. They don’t need water when it’s -40 and any water just freezes over in minutes, nor do they make a mess that needs to be cleaned out.

Meal preparation is not a bloody affair anymore, nor do leftovers spoil within hours.

We love our animal-free homestead lifestyle.

Historically Helen and Scott Nearing are the great-grandparents of the back-to-the-land movement, and they also were an animal-free homestead back in 1932. “The Good Life” is an interesting read for lovers of simple, natural, and handmade life. Another book is Helen’s cookbook “Simple Food for The Good Life” … with recipes for a vegetarian/vegan diet.

Our farm animal-free homestead nourishes well our body and soul. It is a simple, comfortable, and satisfying lifestyle.

I bet if more homesteaders knew how good it is, they would become animal-free too. 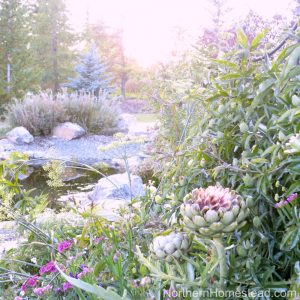 Why we are not prepping

Survivalists or preppers who actively prepare for an emergency, disaster, end of the world, or the coming of zombies seem ...
Read More 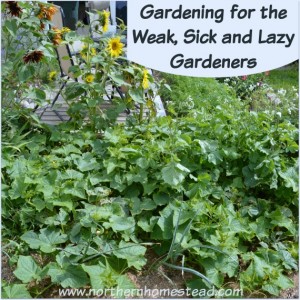 Gardening for the Weak, Sick and Lazy Gardeners

Since I write a homesteading/gardening blog you could get the impression that I am a hard-working gardener, always on top ...
Read More

If you can't garden, go snowshoeing! Except for the indoor garden we are enjoying a break in gardening, that's kind ...
Read More 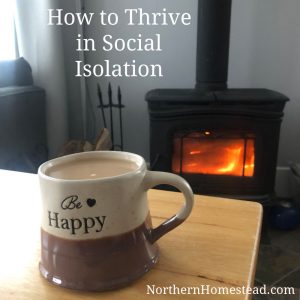 How to Thrive in Social Isolation

Social isolation has been part of our life for a long time and for different reasons. Now that it also ...
Read More 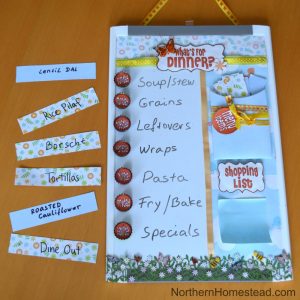 The no-plan meal planning method has been developed over years out of the necessity to combine planning meals with using ...
Read More 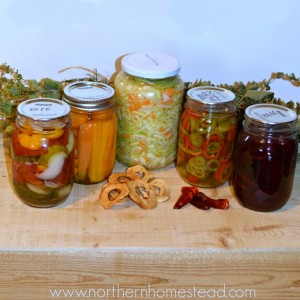 Living in a cold climate with a short growing season - food preservation is a must. In order to be ...
Read More 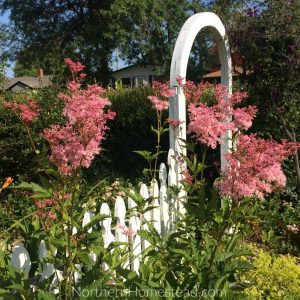 Turn a Yard Into a Garden

Living in a town or city house, either owning or renting you might not consider that you are able to ...
Read More 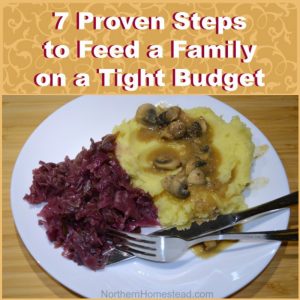 7 Proven Steps to Feed a Family on a Tight Budget

We have been on a tight budget on and off for many years, for different reasons and in different countries ...
Read More 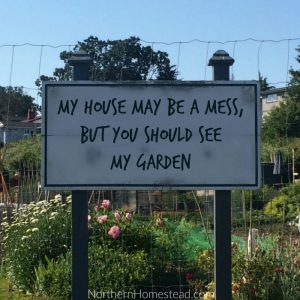 "My house may be a mess, but you should see my garden" - can you relate? As a homesteader, we ...
Read More 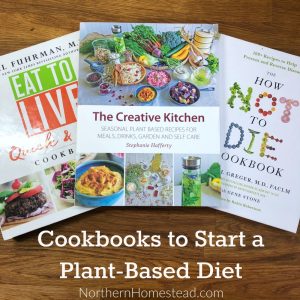 Cookbooks to Start a Plant-Based Diet

‘Make America Healthy Again’ - is the slogan of the Million Dollar Vegan campaign, telling the world why being vegan ...
Read More